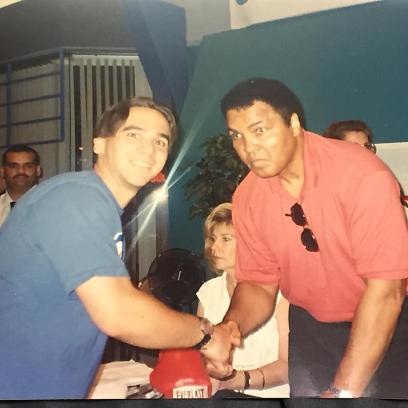 Muhammad Ali combined charisma, self-awareness, integrity & talent in a way no had ever seen before in an athlete, or since. I remember watching his last fights with my dad during the twilight of his career. He would tell me how the guy I saw in all those RAID commercials – “I hate Bugs!” – was once an otherworldly boxer with moves like lightning and fists like thunder. As I got older and learned more about Ali the man, and his work fighting for civil rights & global peace, his legend only grew in my eyes. Especially as the modern athlete became allergic to any kind of political stance or too afraid to stand up for a social cause. A true American original.

This picture is my one fleeting moment with THE GREATEST, Muhammad Ali. He made an appearance at an autograph show in Miami around 1994. I never attended shows like that. Was always more of a Comic Con type geek. But Ali is a different story. He was worth the stretch. He signed my SI cover, and then cracked a joke on me about waiting so long to meet him. We laughed and even though he wasn’t doing pix that day, he waved his handlers off and graciously took this photo with me. Even though his minion didn’t tell him where to look, I still love this photo. RIP, Champ.

Won this in a comic art auction awhile back - original art page featuring #MichaelJackson from the Captain EO 3D comic sold exclusively at Disneyland back in the day. Pencils/Inks by Tom Yeates and it is a BEAUT. Twice-Up page, too which only adds to the appeal. Alexia has already demanded once this is framed, it goes up on her wall. #disneyana #comicart
%d bloggers like this: